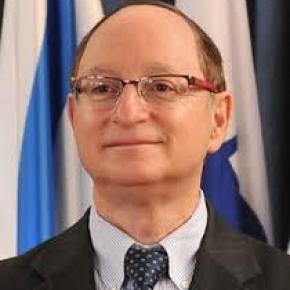 Ambassador, Embassy of Israel in Kigali

Ambassador Mr. Ron Adam has served in the Ministry of Foreign Affairs since 1990. During his first period at the ministry he worked for the office of the Director General and dealt mainly with the Oslo process and the economic peace with the Palestinians. In 1997 he started a long and interesting period of 15 years dealing with all aspect of the United Nations. He started in New York, serving as counselor for economic and social affairs at the Permanent Mission of Israel. In 2004, two years after his return from New York, he became the director of the United Nations Department at the Foreign Ministry and engaged mainly with the efforts to promote the relations between Israel with the United Nations, as well as the image of the UN among the Israeli public. As part of these efforts he initiated the UNGA resolution on Holocaust Remembrance and the International Commemoration Day. He served as a member and the chairman of a UN committee on Program and Coordination and at the same time promoted an ODA law in the Knesset. In 2008 Ron started his post as Deputy Ambassador of Israel to the UN in Geneva where he was in charge on the relations with numerous International Organizations and Specialized agencies, such at the ILO, WHO, UNEP, UNHCR, IOM and ITU. Upon his return to Israel Ron has engaged in the OECD membership of Israel as coordinator, and Special Envoy on Energy at Ministry, working on the relations with the International Renewable Energy Agency. In 2018, Mr. Ron Adam was appointed the first Israeli Ambassador to Rwanda with residency in Kigali.